Expecting The Unexpected: The Challenges Of Traffic Forecasting

Mark Twain said that “Prophesy is a good line of business, but it is full of risks”.

This is a truism that many toll road operators have experienced recently. A 2010 study by Li and Hensher found that for recent Australian toll roads, the first year actual traffic volumes were on average 45% below the forecast levels. Accurate traffic forecasts are important when looking to secure low cost private funding for road infrastructure. So what is causing these large inaccuracies and is it possible to address these problems?

Inaccurate traffic forecasts are not a recent phenomenon. However, these inaccuracies are increasingly being exposed as a result of the greater involvement of the private sector in road development. With more road infrastructure being delivered through PPPs, and subject to tolls, forecast inaccuracies can have a significant impact on revenue.

Traffic forecasting is an inherently challenging task and large variations between forecasts and actual traffic volumes should be expected. Flyvbjerg et al (2005) found that for half the road projects analysed the difference between actual and forecast traffic volumes was ± 20% . The prospect for large errors exists because of the significant uncertainties associated with predicting many of the underlying traffic drivers such as population, households and employment trends and the availability of alternative routes and modes.

However, traffic modelling inaccuracies are not symmetrical. Rather there is a propensity for over-prediction which may stem from two sources.

First, optimism bias on the part of government decision makers and prospective bidders can push up forecasts. In particular, bidders can overestimate the benefits (by taking more optimistic views of traffic forecasts) due to the desire to be the winning bidder. The incentives for bidders to win the deal are heightened when many players’ pay-offs are dependent on the short-term goal of winning, and where there is a perception that the government will not allow the project to fail.

0 %
The amount which first year actual traffic volumes are on average below the forecast.

Second, the technical adequacy of traffic forecasting models must also be questioned. Are they poorly specified? Do they fail to take account of important demand drivers? Or do they merely provide opportunities for optimistic parameter selections?

Li and Hensher’s study found that, with all other factors remaining unchanged, the forecasting error reduces by 2.5% for every additional year since opening. In other words, actual traffic volumes move closer to forecast volumes the longer a road has been open.

The slow initial uptake of toll roads can be expected.

For these and other reasons traffic consultants typically impose ramp-up profiles on forecasts. However, these profiles are sometimes just guesstimates (e.g. 70%, 90% and 100% of the long term forecast over three years) with little empirical justification . More often than not, they are inaccurate with overestimation still plaguing early year forecasts. In fact, the extent to which existing models have taken into account these factors may be overstated, as tolls are often reduced in the short term to stimulate demand above what would have occurred otherwise.

These early year inaccuracies can impose a heavy cost on the revenues of toll road operators. Over-optimistic traffic forecasting is seen as the primary cause for the financial failure of toll road projects such as Cross City Tunnel, CLEM7 and Lane Cove Tunnel.

Interestingly, traffic forecasts for toll-free roads do not display the strong systematic tendency towards overestimation. While this may reflect the lack of optimism bias, it may also suggest that existing models fail to take into account the impact of price on demand. 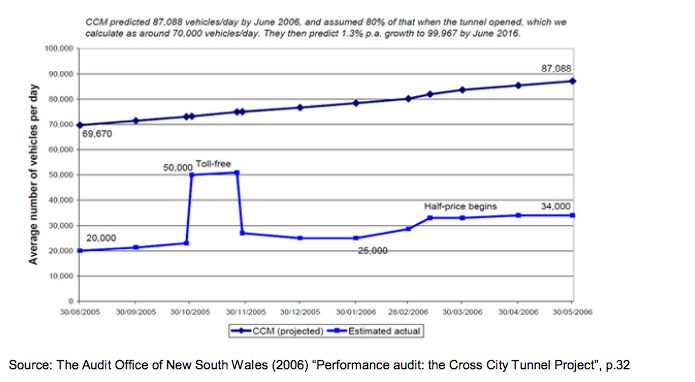 And price can have a significant impact on patronage. When the Cross City Tunnel in Sydney opened in June, 2005, the actual traffic was approximately one third of that forecast (see Figure 1). As a result the Tunnel Company provided 5 weeks toll-free which lead to an immediate jump in patronage. However, when the toll was re-introduced there was an immediate drop in traffic. In order to stimulate further demand, the toll was then reduced by half; this had a much smaller effect on traffic numbers that the removal on tolls altogether.

Understanding how road users actually make travel choices is important. However, this is complex. A well specified model of demand needs to consider commuters’ willingness to pay and the impact of any changes in travel costs. This requires consideration of not only tolls but also changes in vehicle related costs (such as fuel), costs of alternative modes of travel and changes in commuters’ valuations of any travel time, safety or reliability improvements.

The Cross City Tunnel experience suggests price is important but that commuters’ responsiveness to price changes is not linear. Li and Hensher postulated that commuters are less willing to pay for small (as opposed to large) travel time savings. The result is that short toll roads are more prone to inflated traffic forecasts.

Given the increased importance of toll financing, more emphasis needs to be placed on understanding commuter sensitivity to price.

These price elasticities need to be incorporated into traffic forecasting models, many of which fail to include tolls as a specific feature . In particular, the trip generation stage of many demand models is usually determined solely by a host of exogenous factors (socio-economic and land-use variables). Travel costs (including tolls) typically do not feature as an explanatory variable, although they are usually incorporated in later modelling stages to determine route selection . This approach means the dampening impact of tolls, increasing network congestion and rising fuel prices on overall traffic volumes may not be adequately considered.

Furthermore there is little capacity, within existing modelling approaches, to incorporate the fact that price elasticities may vary depending on the time of day or between freight and commercial traffic. All of these elements will become more important if toll operators look to adopt innovative price structures.

IS THIS THE BEST WE CAN DO?

Traffic forecasting is inherently challenging and large variations between forecasts and actual traffic volumes should be expected. Planning and investment decisions need to be made with this in mind.

Focus should be placed on identifying and investing in projects that can be adapted as forecasting uncertainties are resolved (i.e. investments in ‘real options’). For example, a wider corridor could be set aside for a road, making it cheaper to widen if necessary.

That said, the systematic bias towards overestimating traffic, whether due to optimism bias or modelling limitations, should serve as a warning to bidders. Addressing optimism bias requires changes to internal government approval and bidding assessment processes and, ultimately, to the tendering process itself. Here it is worth looking to auction theory for guidance on how best to design the bidding process to reduce the risk of overly-optimistic traffic forecasts. For example, there are lessons about how to induce truthful forecasts from the now widespread telecommunications sector experiences with spectrum auctions.

The second task is to deal with existing traffic models’ inability to adequately consider the impact of price on demand. Unless this is addressed through improved models, greater forecasting errors can be expected particularly if increasingly sophisticated pricing regimes are introduced. Further work is needed to understand commuters’ responses to price and to incorporate this into modelling approaches. Governments could assist by collecting better data to improve model assumptions on price elasticities, actual ramp-up profiles, and hourly and seasonal distributions of demand.

To date, the proposals put forward to address these issues focus on government underwriting all the demand risk. This will not address the problems described. Rather, it will hide any inaccuracies. Unduly high traffic forecasts will continue to result in government prioritising the wrong projects, leading to inefficient investment. This imposes a real cost on society – and with projects in the billions, this is a high price to pay.